Trudeau, O'Regan comments on immigrants pit Canadians against each other

The Liberals were once the party that claimed to represent Canadian values and embody Canadian patriotism. Today, it seems that they’re ashamed of Canadians.

Prime Minister Justin Trudeau routinely accuses others of “fear-mongering” and trying to “divide Canadians.” Whenever a critic raises concerns about the crisis of illegal border crossings, Trudeau responds with the same boring old talking points.

He deflects blame elsewhere and accuses critics of trying to pit Canadians against one another.
Ironically, it’s Trudeau’s own inner circle that repeatedly makes disparaging claims that divide Canadians on the basis of identity politics.

The latest example comes from Trudeau’s minister of veterans affairs, Seamus O’Regan, who claimed on Twitter that Canadians are inferior job-creators compared to immigrants.

O’Regan perhaps didn’t read the article or the report itself, which offer more nuanced and less conclusive findings.

The study looked at data from immigrants who came to Canada between 1980 and 2010 and decided to measure immigrant job-creation levels after nine years in Canada.

The study, however, also notes that only a small percentage of immigrant-owned businesses had any employees, “resulting in a lower per capita job-creation rate.”

In other words, the study found the exact opposite of what O’Regan and the CBC headline claim – Canadian-born business owners create more jobs, both per capita and in total numbers.

Aside from getting the facts wrong, O’Regan’s characterization of our immigration system – stating the goal is to boost economic outcomes and create more tax revenue – is also inaccurate.

Under the Trudeau Liberals, Canada has decreased the share of immigrants who come through our economic programs and welcomed less productive types of immigrants, including refugees, asylum seekers and elderly parents and grandparents.

Trudeau is deliberately bringing in a mix of immigrants who are more dependent and less entrepreneurial.

This isn’t to say that immigrants don’t create jobs, and we all know newcomers who contribute tremendously to our communities and our country.

My family, probably like yours, provides an example of this. My husband and his parents, all immigrants, are each job-creators who have built their own businesses. But I’ve created half a dozen jobs too, so has my brother and my father, not to mention cousins, aunts, uncles, grandparents, great-grandparents and ancestors going back generations.

So, why are the Liberals pitting families against each other?

O’Regan has since apologized for his ignorant comment, but he’s not the only Liberal to make this sort of divisive claim. Last summer, Trudeau said he was “jealous” of those who immigrate to Canada. 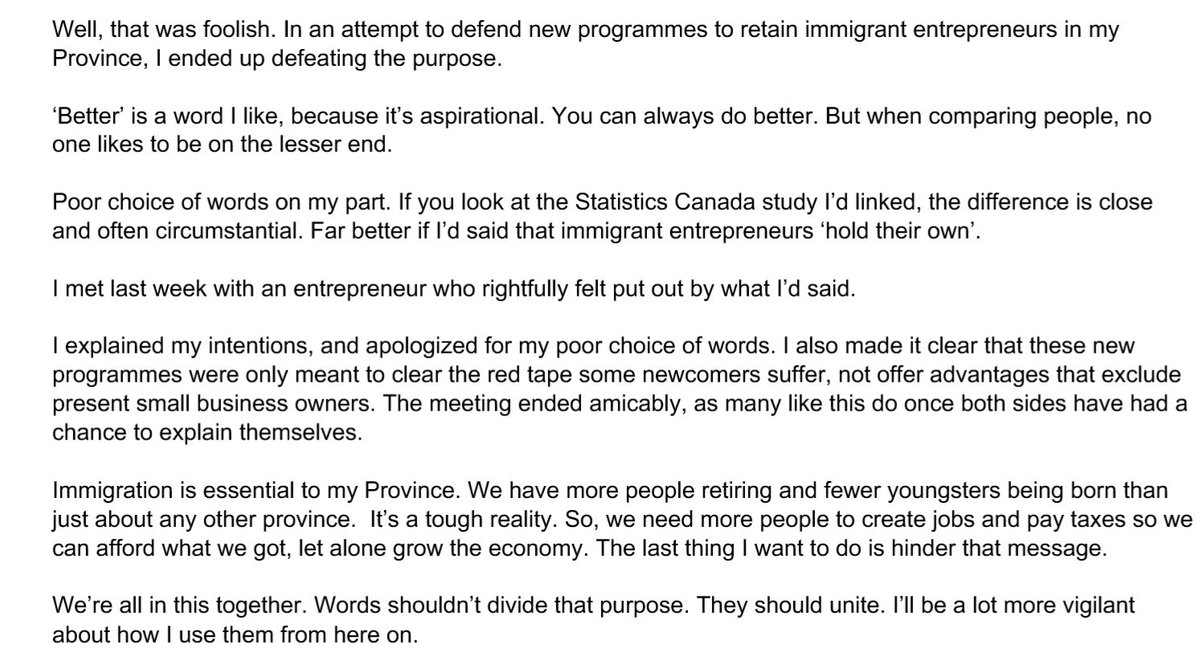 “As proud (as) I am of Canada, I didn’t get to choose this place,” said a gushing Trudeau. “This is your country, more than it is for others because we take it for granted,” said Trudeau to immigrant Canadians.

Why would our country belong to some Canadians more than others? Why would the Prime Minister disparage three-quarters of the country and accuse them of taking Canada “for granted”? Why would a cabinet minister claim that immigrants are “better.”

The Liberals were once the party that claimed to represent Canadian values and embody Canadian patriotism. Today, it seems that they’re ashamed of Canadians.